As part of the project “APV-Obstbau”, BayWa r.e. and the Fraunhofer Institute for Solar Energy Systems ISE have cooperated with other research partners to set up an agrivoltaic system for research purposes at the “Bio-Obsthof Nachtwey” in Gelsdorf, Rhineland-Palatinate. It is the first system of its kind in Germany. The total test area for the project covers around 9100 square meters. The agrivoltaic system, which has a capacity of 258 kWp, has been installed on approximately one third of the plot.

The overarching goal of the project, which has been funded by the State Ministry of Climate Protection, Environment, Energy and Mobility of the Land of Rhineland-Palatinate and the Federal Ministry of Food and Agriculture, is to increase climate resilience in orcharding and ensure the secure and sustainable production of apples while also generating solar power.

Eight different apple varieties are to be used to explore several research questions during this project, which is planned to run for five years.

The project first compares apple production at the same location under four different crop protection systems: Foil roofing (blocks rain), hail protection nets (does not block rain), APV with permanent, light-permeable PV modules (blocks rain), and tracking PV modules (blocks rain if necessary). Two different types of modules are used, with solar cells arranged either in strips or in a block pattern. The aim is to determine to what extent the agrivoltaic systems protect the plants and fruit from harmful environmental influences such as hail, heavy rainfall, sunburn, frost or extreme temperatures.

Researchers will also investigate to what extent different approaches to light management by way of different PV module configurations influence plant growth and crop yields. Other aspects of the system relating to landscape aesthetics, economic viability, social compatibility and plant cultivation parameters will also be examined.

Stephan Schindele, Head of Product Management for APV at BayWa r.e. commented on the project: “We believe that agrivoltaics is a long-term solution that supports farmers in adapting to the consequences of climate change. We can maintain the existing ecosystem and tap into further potential through synergy effects and solar power generation.”

“After having considerable success using APV with professional berry crops in the Netherlands, we have decided to take the important next step toward espalier fruit in Gelsdorf. We have recognized the potential and synergies associated with APV, which can have considerable effects on permanent crops such as apples, pears, cherries, kiwis and others. This potential is something we want to make use of in the long term, while also enabling the expansion of photovoltaics without land use conflicts.”

The APV project in Gelsdorf also aims to demonstrate the economic benefits for farmers, in addition to agrivoltaics helping them to adapt to climate change and protect their crops. Economic benefits include lower and more predictable energy costs in the long term, fewer investment costs for crop protection as well as lower costs for operating materials and waste disposal.

Andreas Steinhüser, Acting Group Manager for APV at Fraunhofer ISE adds: “The research project “Agri-PV Obstbau” is not only intended to demonstrate ways of reducing carbon emissions in the agriculture sector, but also aims to make significant contributions to climate protection by avoiding nondurable materials as well as pesticides and fungicides. We are also focused on addressing societal issues such as acceptance and social compatibility, which will play a crucial role in the expansion of APV.”

The power generated by the agrivoltaic system can be used in upstream and downstream applications related to the production of apples. For example, the power from the APV system is being used to run an electric tractor that was provided by AGCO GmbH. The energy is also being used to supply the irrigation system with APV self-generated power. A PV rooftop system is already being used to supply the cold room with green power. Overall, by implementing an operational energy concept, the aim is to considerably reduce carbon emissions on the farm through solar electrification.

The foil roofing and hail protection nets, which serve as reference systems, were installed by “BayWa Agrar Obst und Hopfenzentrum” in Tettnang. Physiological monitoring of the plants is made possible by “NEXT Farming”. Using this software management system from the BayWa AG, farmers can control their entire operation as well as their irrigation system. Farmers are continuously informed of possible risks based on data monitoring and weather forecasts, which enables them to control their crops.

In addition to BayWa r.e. and Fraunhofer ISE, the following research partners are involved in the project: DLR Rheinpfalz (Agrarwissenschaft), Fendt (AGCO GmbH), EWS Schönau and the Bio-Obsthof Nachtwey. 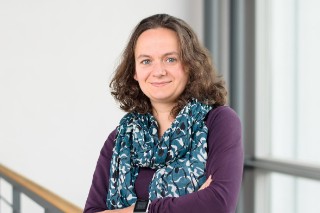